When asked what image came to mind when thinking of home, the answer I received from Leith, a member of the Rules Beach and Baffle Creek community, was of walking along the vast beach with Red Dog. ‘The area represents tranquility,’ Leith told me. Yet, the peace he felt there wasn’t due to emptiness; quite the opposite. You can see whales breaching from the shore during the winter months, sailboats flickering on the horizon, and the coastal plants and trees are not only a haven for wildlife but striking sculptures in themselves.

The Pandanus tree, Pandanus tectorius, and creeping vine Coastal Morning Glory (Goat’s Foot Convolvulus), Ipomoea pes-caprae, have been represented here as key native species in this landscape. The latter is also edible when cooked, and is known to have been used extensively by indigenous peoples to treat bites, stings, and other inflammatory skin conditions.

‘Good fishing out here too,’ Leith explained. ‘Plenty barra, mangrove jacks, flatheads. Even Red Dog caught a flathead once!’ The loyal companionship between Leith and his dog, who he affectionately refers to as Miss Red, is illustrated in this piece both in sketch portrait form and also in a tender vision of the pair interacting on the beach.

Nevertheless, the intention behind the diagonal composition was to achieve the sense of scale of this epic beach, keeping nature at the heart of the scene to evoke that sense of tranquility in the viewer. Baffle Creek, with its many estuary islands at the mouth of the creek, is represented in the clouds, while the stylised sun reflects the symbol used on the local Rules Beach sign. 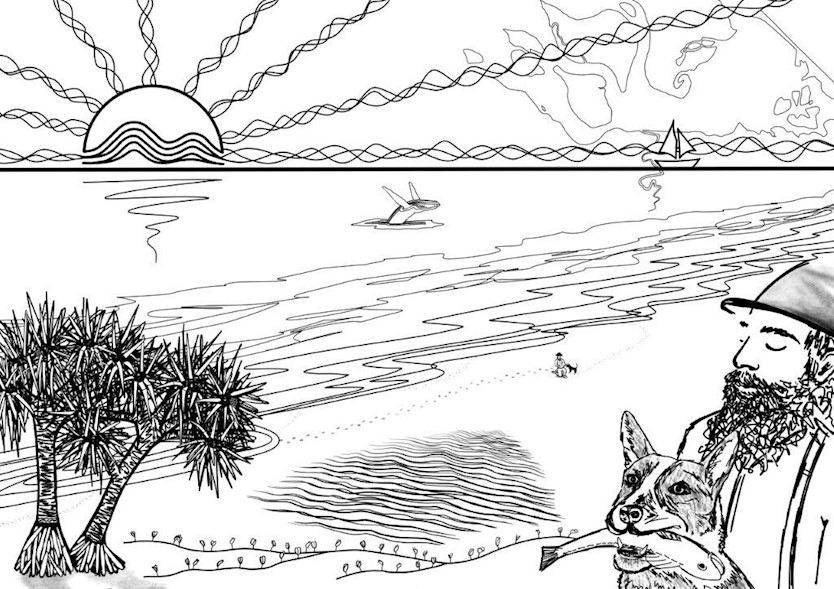