The Baffle Creek community is proudly home to a hive of activity, most notably perhaps is fishing, with the Baffle Creek Family Fishing Festival and Competition held annually. Its logo, a heart-shaped fishing rod reeling in a fish, is therefore represented in the centre of this artwork, and the mangroves which surround the Baffle Creek boat ramp line the water’s edge here too.

However, there is a multitude of community groups that are popular in the area, including the cricket club, horse-riding club, the men’s shed, the art shed, and the youth group. There is even a lawn-mower racing event! Community member Jody who has been in the area for a year said that she felt there are ‘obvious layers of community support that you can access when you need it.’ These layers have been represented by shapes resembling mangrove seeds growing in the earth on the right side of the artwork.

Jody decided to move to the area with her husband because of ‘the tranquility.’ They had found a property that suited them; a small house where she could build an aquaponics system and transform one of the sheds into an art gallery and studio. The couple had named their home ‘Ubuntu’, which in Swahili describes a generosity of spirit: ‘You get back what you put in’, Jody explained. Jody told me that the day before the official opening of her home studio, the rain had flooded the entrance to her place so she hadn’t expected anybody to come. However, the water subsided quickly and over sixty people turned up to celebrate which blew her away. The hawk, her favourite bird of prey, is represented in many of her artworks and in this artwork in the top right-hand corner.

Jody has also begun a new venture of running sourdough baking workshops on the weekends. ‘Ideas are well received in this community and there are lots of small businesses,’ Jody said. Her workshops have been very popular, earning her the title of, ‘the Baffle baker.’ Jody described herself as ‘the big mama’ of the community who holds space for community members to share and connect. As Jody spoke, she opened her arms wide as though holding people. She said that it was amazing how many different characters have come to the workshops.

Jody spoke of people being drawn to the area because of the isolation it provides, but the flip side is that when disasters strike, you don’t want the isolation. ‘It’s sort of like the bush telegraph out here [a rapid informal network by which information or gossip is spread], but we need technology for safety and communication.’ Jody has invested in satellite internet at their property called Star Link which is expensive but the only option available for emergency situations. She had to give up making her artist website because she couldn’t upload images using the Sky Mesh rural internet. Both internet providers have been represented here in the sky.

Jody said that the fire in 2018 had made people more open and that the event had been a ‘point of difference’ in the history of the place, almost as though there had been ‘a change of guard.’ Some people had moved on, realising that their lifestyle priorities had changed, while newcomers had arrived seeking the tranquility and small community that Baffle offers.

Jody’s friend Patricia, known as Patty, had relocated to the area with her husband after holidaying there for many years to finally chase ‘the Baffle dream’ in their retirement. Patty spoke of not doing very much when they first moved because her time was filled with watching the mob of twenty or so kangaroos from the front deck of their cabin and observing the creek from the back. She told me that she once spotted an echidna swimming along the river before watching it crawl into the bank near their home! Patty drew the creek and surrounding bushland in my sketchbook which I have represented and developed in this artwork.

For Patty, the dreamlike quality of the area could be summed up in a memory: a mate playing guitar while a few others listened around a campfire.

But, in the seven years of living there, Patty, Jody, and the community had faced natural disasters of an incomprehensible scale. When the rain came in 2017, the creek rose up and flooded their cabin. The couple spent the day lifting mattresses onto the tables and gathering their possessions to place as high as possible. By nightfall, there was no electricity, and Patty’s husband lay by her side on their bed in the dark, with their young puppy down at their feet. Patty and her husband could feel the rising floodwater by the side of the bed with their hands. Late that night, one of their mates came to rescue them by boat.

Since the flooding, Patty and her husband have built a new home higher up on their property and they now rent out the cabin. ‘The community has been very generous since then,’ Patty said, ‘bringing plants and cuttings so we can regenerate the yard, and helping out with the laundry of more difficult items like curtains and blankets.’

These days, Patty is very involved in the art shed, acting as Treasurer on the current committee and helping to hang exhibitions. Patty knows she can rely on her friend Jody to give her a hand with hanging the exhibitions if she is struggling to use the ladder. To acknowledge the beautiful support of these women in their shared creativity, this artwork of ‘The Baffle Dream’ has been placed in a wooden frame, with the stylistic swirls at the top and bottom reflecting the shape Jody’s arms made when she described Ubuntu and the feeling of community support and generosity. 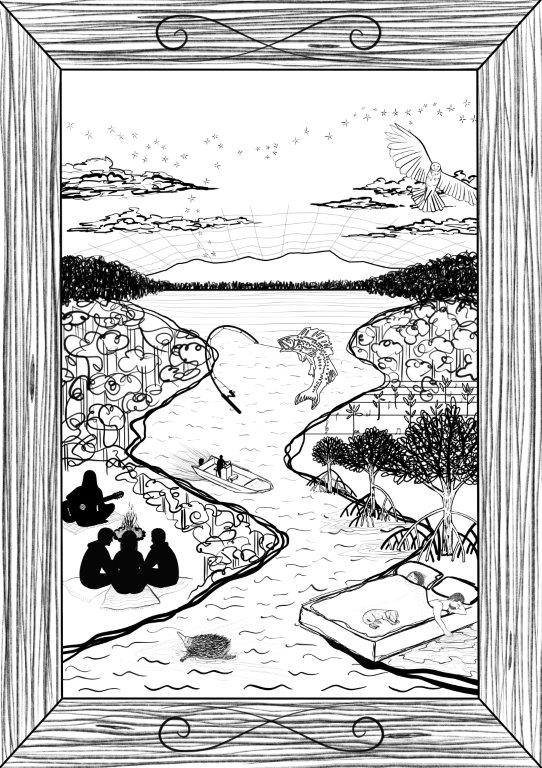