Greg, a former carpenter by trade, introduced himself to me as Muddy; a nickname given to him many years ago by friends who likened him to a Mudskipper fish. Greg has lived in the community for thirty years, and is currently on a property of forty acres where he actively practices silviculture - the science of sustainable forest management - ‘to keep all of the native trees growing.’

‘I don’t need anything more than what I’ve got right here,’ Muddy told me. ‘If it stays the same until I’m ready to go into a hollow log on my property there somewhere then that suits me just fine.’

Muddy’s favourite trees are the ones that are ‘becoming quite rare to see’ - the native red and white cedars - which he is trying to regenerate on his property alongside other old natives like teak, hoop pine, and firewheel trees. ‘In another couple of hundred years' time, they’ll look pretty impressive!’

Muddy’s sister gave him a book on building nesting boxes for native birds. Since the fires took down a lot of old, hollow trees, there are not many nesting places available, so Muddy has made a few boxes that he has on his property, and has Rosella’s nesting in one of them. Muddy’s sketch of the nesting box has been included in this artwork.

Muddy also recalled that people used to cut a lot of railway sleepers out of the trees in the area; a practice that was only tapering off when he first came to the area thirty years prior. Muddy understood that these people didn’t just clear the land, but take a little from different places, rotating over time. ‘They didn’t want to destroy their only resource,’ Muddy laughed. ‘You wouldn’t even know that for a hundred years, they were cutting sleepers out of here. And way, way back, when we used to have a railway station here, timber and the cattle always used to be brought down here into Lowmead to be loaded onto trains.’

Luckily, the fire of 2018 stopped across the road at Muddy’s property so there was no damage, however, Muddy was involved as a member of the local fire brigade and said it was ‘pretty terrifying that day.’ Muddy and the woman in the car with him nearly got burnt, getting totally trapped in a property. They managed to get out by driving straight through the flames onto the main road, and Muddy said it was lucky that nothing was going by on the road. ‘That fire still gets me,’ Muddy said. ‘After that fire, I pulled out of active fire-fighting duty. I just couldn’t go back to do it again.’

Muddy spoke of the community being more aware now of what can happen in regard to fires, although there are newcomers from the city who have never had anything to do with bushfires. ‘They might find out the hard way like the rest of us did, I suppose. Even though all of the information is out there about what to do, the reality of it is a bit different.’

Between the locals, there was more help shared after the floods of 2013 which were more damaging to infrastructure than the fires. Muddy himself took in an older couple who had lost their home and had nowhere to go, and they ended up living with Muddy for six months until the insurance came through to rebuild the houses.

Another resident called Matt told me he was originally a Londoner but had travelled and lived around the world before settling in Australia with his ex-wife and having three sons (two of whom, Benji and Bayley, joined the workshop).

Matt, Benji, and Bayley spent a lot of time outdoors together. The Baffle Creek runs through their property, so the boys would enjoy jumping from the rocks into the water, and swinging from the branches of fallen trees. ‘The thing is,’ Matt said, ‘the floods are fun here because it changes the place. It keeps it interesting to explore… It’s like the Florida keys.’ Matt and his sons listed the things they would encounter as he’d take them downstream, floating in the current: yabbies, turtles, fish, fallen trees, giant mussels, nests of the weaver bird, and Mango trees which were ‘so big you could hide in them!’

Matt said there were wonderful people here in the community: ‘All genuine - as long as you keep out of the small-town politics… If money is your God, then you’re not in the real world. I’m a spiritual man. We love the beaches. The wind, it replenishes you. The sun is your fire. That’s why I moved to Australia - to live on a beach.’

I invited Benji and Bayley to make drawings of the creek on their property and that’s when all of the stories came out. They showed me the locations on their maps of where they would duck under the water and hold their breath, the rock they would jump off into the deep pool, where they fed the baby turtle that came up onto the rocks, where they’d eat a picnic together, and where dad would smoke his ‘special cigarette.’

While Matt was talking, a local volunteer ‘firey’ came into the community hall and Matt thanked him again for helping to jumpstart his car which had broken down a few weeks earlier. I commented that the man was wearing a fantastic hat; it was worn out, with stains and holes in it. Matt said that he would buy him a new hat to say thank you, and checked with his two sons if they thought it a good idea. The man said that he only bought a hat once every two years because he liked a particular style and nothing else, but once the man had left, Matt seemed determined to get him a new hat as a gift.

Seeing the man again reminded Matt of a memory of a flooding event that happened not long after he’d arrived in the area five years ago. He described being in a position where he had to make a decision to leave the boys at home alone because the rain was coming and there were no supplies in the house. He told the older son to take care of the youngest, and Matt left the house to try to reach the village shop with a couple of bottles of water in his backpack and a peanut butter sandwich. Matt got lost, pushing his way through cane fields and trudging along the fence lines of properties, but he was sure that if he kept going, he would make it to the road that runs into the village centre. After walking through the day and all through the night, Matt eventually made it back to the exact same spot that he’d set out from, with no supplies. His two sons didn’t say a word during the telling of this story but shared small glimpses with each other every now and then. 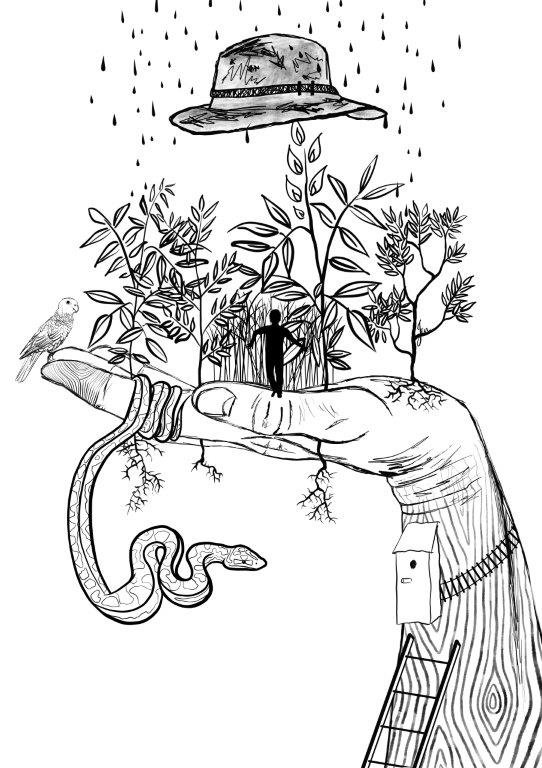